Crematogaster scutellaris and Camponotus lateralis are two common species in the south of France. Frequently, the species are fully independent and doesn't interact at all.

Crematogaster scutellaris form large, populated colonies in dead wood (rarely under rocks) from which it build a strong networck of trail leading to colonies of aphids. This ant is aggressive and frequently dominant.

Camponotus lateralis colonies are a lot smaller, and as frequently located in wood as under stone. the ant is opportunist, and allways run away every danger.

It has been observed that thoses species ressemble each other a lot, having same size (major Camponotus being a litle taller) and the same color pattern. therefore a batesian mimetism was suspected, predator avoiding the bad taste of the Crematogaster (Emery).

But what is more intersting (to my point) is the fact that it is easy to find Camponotus lateralis following the trails of the Myrmicine, using them to access to the colony of aphids. The pheromone of the latter is then used as an allomone by the former.

Note that the previous mimetism is not efficient enought to fool the Crematogaster. So the Camponotus avoid any contact by its higher velocity. If a contact can't be avoided, it run away out of the trail for a few seconds and come back later. This is a sort of "social parasitism", the parasit "stealing information" from its host.

photo 1 : The colony of aphid is tended by some Crematogaster scutellaris. In the top right corner, a worker of Camponotus lateralis, following the trail, find the colony. It is immediately attacked by the Crematogaster (see the open mandibles of the one on top), and run away without having been armed.

photo 2 : After a few second away, on a hairy litle fruit, he tries to come back to the aphids without being seen. 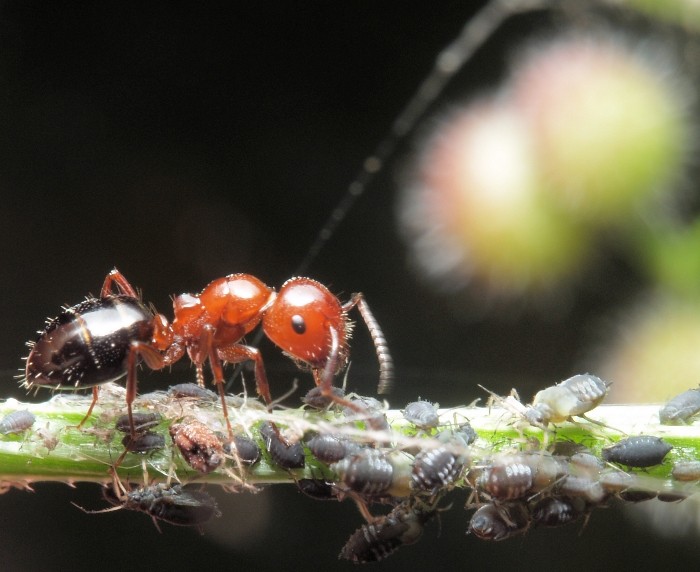 
So from what I have seen, This Camponotus species and as far as I know :
- ressembles to an aggressive, dominant, bad-tasty species (batesian mimetism)
- uses, as a social parasit, the information provided by this species, whiwh is not close phylogenetically

This is awesome and your pictures to illustrate this story are really good too.

Is that Camponotus has some polymorphism? And if yes, is the workers looks all like this or only the sub-caste in contact with the Crematogaster?

Apparently from what you describe, it does not seem to have any chemical mimicry? I was thinking, is the Camponotus behave the same way than the Crematogaster ? Or do they show slow movements, a very conspicuous approach in contact of the colony?

I don't if in that case it is a little bit exaggerated to talk about social parasite, because they don't interact with the Crematogaster inside their colony, right? I think we can limit the expression to cheater, or maybe if I want to try a new neologism "trophoparasite".

Yes, "social parasite" might be exagerate, the two species being largely independant, and no Camponotus being fool enought to go inside a Crematogaster nest... "Trail robber" maybe ? "cheater" is fine too

The shape of the propodeum might only be a coincidence. Indeed, all the Camponotus in the subgenera Myrmentoma exhibit more or less such an angular shape.

I have seen as well major and minor using Crematogaster trail. To my knowledge, there is no specialised sub-caste.

If there is a chemical mimicry, it is not efficient enought to fool the Crematogaster when there is a contact. Maybe a short-range one ?
I have seen a paper showing it was one of the rare species which resist the chemical weapon of that Crematogaster... And the consequence was that the Crematogaster didn't use it against this species. This indication could argue for a partial mimicry ? (I'll try to find the paper)

The two species don't behaves the same way indeed. The Crematgoster allways move stright on a trail, whereas the Camponotus try to avoid contact, change its speed... When there is contact, the first one attack, the second run away 2-3 cm very fast and then slow down, and wait a while. After a confrontation, the Camponotus come back to the trail very carefully. 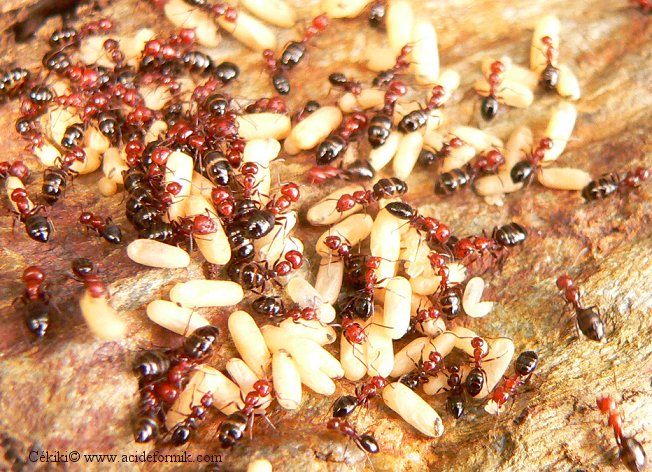 Away from a Crematogaster trail, this species is often almost "lymphatic"... When you find a nest under a stone, you have time to take some pictures before closing the nest : they almost don't react.

The Camponotus of the Myrmentoma subgenus present here in the US (at least for the one I know) don't have this shape on the propodeum.

What I did is to take a look on Antweb and compare the different Myrmentoma. For the three European species that I was able to find pictures of, C. dalmaticus, C. piceus and C. lateralis. Camponotus lateralis is the one that present the most important "bump" (based on the pictures).
Also, at the base of the petiole on the propodeum, we can see in the three species some kind of "protuberances" that have the shape of propodeal spines. None of this characters exists in the North American species.

This intrigues me and that would be interesting to compare the geographical range of Crematogaster scutellaris and the different Myrmetoma in Europe. Maybe the distribution of C. lateralis and the one of Cr. scutellaris corespond and the other Camponotus are more distributed on the edges? But probably, I'm totally wrong. I just think that this shape is intriguing.

I don't if in that case it is a little bit exaggerated to talk about social parasite, because they don't interact with the Crematogaster inside their colony, right? I think we can limit the expression to cheater, or maybe if I want to try a new neologism "trophoparasite".

=> Seifert use the word "parabiose".

In which context Seifert use parabiosis? Does he give an example associated with?

According to Holldobler and Wilson in the ants (1990), a parabiosis is the utilization of the same nest and sometimes even the same odor trails by colonies of different species, which nevertheless keep their brood separate.

So I am okay concerning the following of the trail, but it seems (according to the definition)that the first condition is not filled in that case, because the nest are separated.
However, something interesting is that the examples of real parabiosis between species of Camponotus and Crematogaster seems to have been reported several times under the tropics (Ex: Swain R.B. 1980. Trophic competition among parabiotic ants. Insectes Sociaux 27 (4) 377-390). I ask me if this two genera have frequent interactions because they share common ecological traits (arboreal lifestyle) or if it because they use some similar type of pheromones for there trails?

The case of interspecies pheromones trails was also noticed between Polyrhachis rufipes and Gnamptogenys menadensisby Gobin et al. 1998. See the abstract below:

Gnamptogenys menadensis (subfamily Ponerinae) foragers use chemical trails to home to their nests. Although prey capture and retrieval are generally performed solitarily, trails seem to enhance foraging to areas rich in prey or to sugar sources. Trail laying and following are most conspicuous during nest migration. These trails are laid down by tapping the sting onto the substrate. In laboratory tests, only extracts from the Dufour's gland were readily followed. Workers of Polyrhachis rufipes (Formicinae) use the trails of G. menadensis to gain access to otherwise nonavailable sugar sources. When they encounter Gnamptogenys foragers, P. rufipes workers show a typical aggressive antennal boxing, to which Gnamptogenys reacts with a submissive behavior. This is the first report of commensalism between a ponerine and a formicine ant.
Gobin B., C. Peeters, J. Billen and E. D. Morgan. Journal of Insect Behavior 11 (3): 361-369.


However, I think we can say that the Crematogaster pheromones trail act as a kairomones for the Camponotus

Anyway, that is a really cool story which would be interested to study.

I was looking for other articles when I found this one talking about a Batesian mimetism between two Malaysian species: a Crematogaster and a Camponotus. I think you will be interested.

Here is the abstract:
The mechanism by which palatable species take advantage of their similarity in appearance to those that are unpalatable, in order to avoid predation, is called Batesian mimicry. Several arthropods are thought to be Batesian mimics of social insects; however, social insects
that are Batesian mimics among themselves are rare. In Malaysia we found a possible Batesian mimic in an arboreal ant species, Camponotus sp., which was exclusively observed on foraging trails of the myrmicine ant Crematogaster inflata. The bright yellow and black colouring pattern, as well as the walking behaviour, were very similar in both species. We observed general interactions between the two species, and tested their palatability and the significance of the remarkably similar visual colour patterns for predator avoidance. Prey offered to C. inflata was also eaten by Camponotus workers in spite of their being attacked by C. inflata, indicating that Camponotus sp. is a commensal of C. inflata. An experiment with chicks as potential predators suggests that Camponotus sp. is palatable whereas C. inflata is unpalatable. After tasting C. inflata, the chicks no longer attacked Camponotus sp., indicating that Camponotus sp. is a Batesian mimic of Crematogaster inflata.

The experiment with the chick is really cool! I think you should try the same thing with the mediterannean species and see if you get the same results.

Not to self promote but I thought you might want to know that I worked on a project where two unrelated species had positive interactions at food baits.

Polyrachis spp. in Borneo seems to use the same foraging trail than Camponotus cylindricus spp. Looks like Polyrachis steal information on food sources and in exchange defend the foraging trails of CaCy (Davidson et al. 2007, Biotropica). Do you know other examples of such behavior?

Most interesting and nicely illustrated discussion! I have let the folks over at the Spanish ant forum lamarabunta know about this, since some of them may have insights to contribute from their experience.
See http://www.lamarabunta.org/viewtopic.php?f=3&t=14328

I would note that the North American species of the so-called subgenus Myrmentoma do not have the same propodeal shape as the European ones, but rather a form more like the larger sympatric congeners. But without a through revision, frankly, the subgenera of Camponotus have little to no phylogenetic basis or meaning.