SuperOrganism :: In Praise of Ants :: For the Love of Ants

For those like me who live on the east coast of North America, nothing is more common in forest than meet Aphaenogaster rudis. I have to admit, I like this species and at the same time, I hate it.
I hate it because when come the time to make the identification, I am never sure of who that could be. Aphaenogaster okay, but rudis ? picea? or even carolinensis or miamiana ? No definitely this group of fulva-rudis-texana for Aphaenogaster is not easy, at least not to me. And I don't talk about the fact that according to Umphrey (1996), the rudis complex could have still more species

. If someone has some good clues to identify them, I would be interested.

But forget the taxonomy of this group for a second to something that reconcile me with them. Their ecology and behavior. Some months ago I read an article by Banschbach et al. (2006) about the use of tools by A. rudis. A use of tool by ants? Usually it is the kind of thing that you read with primates, but here no it was not a mistake, that was with some ants. And not with a tropical species that I could observed during two days of my life, NO it was one of the most common of the ants living in my backyard! Awesome. The ants would use some pieces of wood or dirt to collect some liquid resources and bring they back more easily in the nest. Basically, they use the absorption properties of these materials to use them as a foraging tool. I have to admit that I felt a little bit stupid, because using baits with those ants, and sometimes liquid ones, I thought that the accumulation that ants made of the debris on the baits was to avoid to die by drowning. No it was to improve their foraging efficiency.

The second "surprise" came this week with an article by Buczkowski and Bennett (2007) on the predation of termites by A. rudis. One year ago, I have collected different midden piles of A. rudis to analyze what was inside. In fact, I was interesting to count the number of seeds present. Yes, A. rudis is not just a tool inventor and a termite predator, but also is really well known as a seed dispersal agent for many herbaceous plant living in the East coast forest of the US and Canada.
So, analyzing those ants' garbages, I found many head and mandibles than seemed to me to be termites soldier heads. This article, give me the proof that I was waiting since then that A. rudis seems to be an active predator of the termites Reticulermes flavipes. An interesting idea in the context of my actual research...

Aphaenogaster rudis, a common species that has definitively much more to tell us... 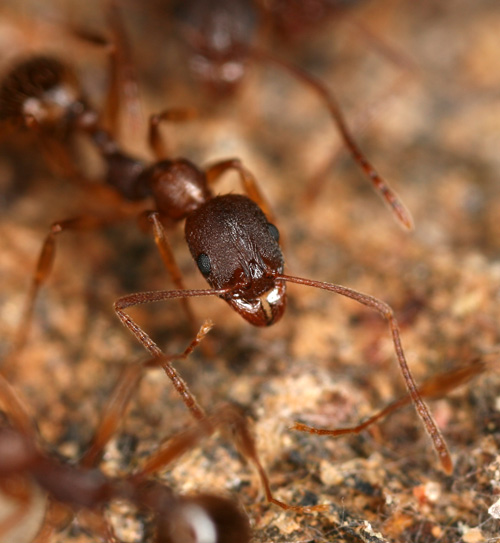 SuperOrganism :: In Praise of Ants :: For the Love of Ants